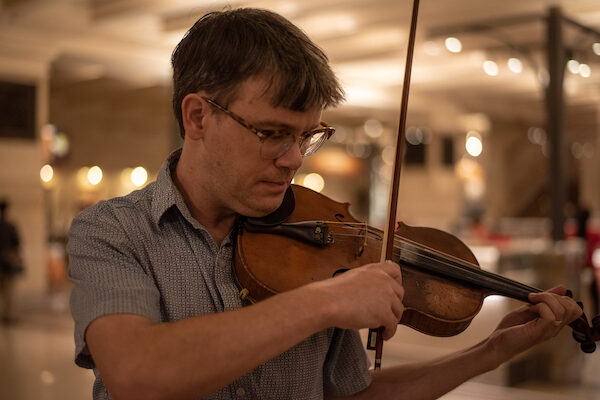 Born and raised in Seattle, Tom Swafford left home in 1991 and lived in Seattle again from 2002-2007. During that time, Tom formed many connections in Seattle’s vibrant creative music and arts community.  He began working with Butoh artist Vanessa Skantze in the group Death Posture. In their duo work over the years, they developed a unique and powerful language connecting sound and physical gesture. He played with Jesse Canterbury in the double violin/double clarinet quartet Cipher (with Tari Nelson-Zagar and Greg Sinibalidi), and in the Tone Action Orchestra (as well as various ad hoc groups) with Jim Knodle and Greg Campbell. His experience during those Seattle years was essential to his development as a player.

He moved to NYC in 2007 and in 2021 he relocated to Providence, RI. His new album, Rough Spaces, was recorded in Boston in the spring of 2021 and beautifully mastered by Mell Dettmer. With this album, he feels he has finally arrived at a distinct solo voice and he is excited to share it! He’ll be joined by Vanessa, Jesse, Jim, Greg, and percussionist Eveline Müller.