A Night for 4 Drummers 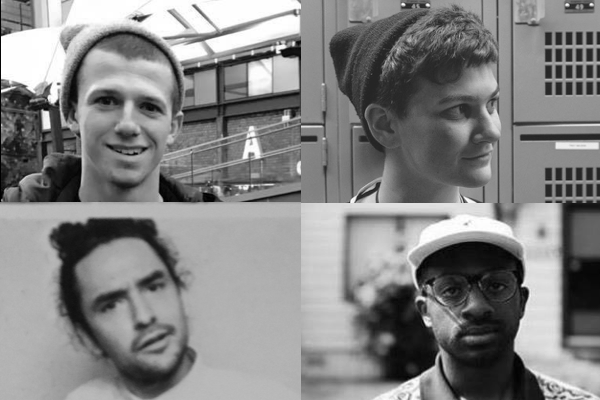 A night for 4 drummers presenting solo works for drum set, focusing on each musician’s singular relationship with the drums, solo performance, music and identity.

Mike Gebhart is a Colombian-American Drummer, who relocated to Seattle in 2013. In that time he studied with Ted Poor, Greg Sinibaldi, Cuong Vu and Huck Hodge. He has performed with Bill Frisell, Ben Street, Pete Rende, Ryan Ferreira, Bill McHenry, Wayne Horvitz, Geoff Harper, Jeff Johnson and Simon Henneman. He co-leads The Sky Is A Suitcase and plays in Terror/Cactus, February, and New Series One. Currently he is focused on singing and drumming, and performing his compositions.

Ruby Dunphy is a Chicago born, Seattle based performer, composer and percussionist. She moved to Seattle in 2014 to attend Cornish College of the Arts and attained her Bachelors in Music in 2018. She has studied western classical, jazz, ragtime, Brazilian, Ghanaian, chamber, improvisational, soundpainting, conduction, rock, and gamelan music. She loves feedback, resolution and loud noises, but as of late tends to loathe all three. Her biggest fear is humiliation.

D’Andre Fontanelle has been described by critics in the New Haven Register, and independent magazines in the New York City area as a very life-influenced, organic, and musical percussionist. He gradauted with his Bachelor of Music in Classical Percussion from New York University, and acquired his Masters in Music Education from a small liberal arts college in Connecticut – The University of Bridgeport. As a resident of Seattle for 3 years, D’Andre is one of the leading drummers on call for many singer-songwriters, playing with The Backslide gospel, Kate Dinsmore and Elena Loper.

Casey Adams is a Spokane native and (fairly) recent transplant to Seattle, who self-defines as a drummer, electronic musician and DJ. He plays drums in a variety of improvised ensembles, and records/releases/performs as Dorian Slay and nothing but the dead and dying, outputting electronic music ranging from harsh noise to left-field dance music. Casey’s music explores the strange periphery of many diverse genres, and attempts to fuse seemingly disparate sounds and styles through their music, aiming for personal understanding and self-actualization.