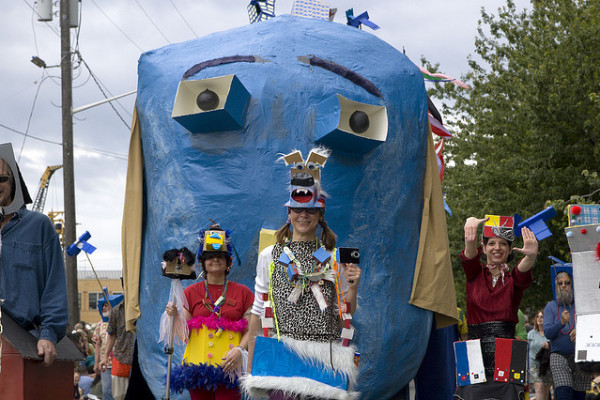 Come celebrate an evening of collective musical joy! Boxitania is the brainchild of Seattle vocalist and improviser Elizabeth Lawrence, affectionately known as Detonator Beth or DB. This performance was originally created in collaboration with composer Scott Adams and artist Maris Kundzins. It is a square country with no boundaries populated by the most joyous and spontaneous beings in the universe. It was first revealed as a country at Fremont Solstice Parade via the Boxitanian Revolutionary Rolling Band, and was iterated the following year as a huge float called The Spirit of Boxitania.

Elizabeth Lawrence has engaged Amy Denio to coordinate a new visit to the distant shores of Boxitania. The Boxitanian Liberation Orchestra will be playing great classics such as the Boxitanian National Anthem as well as many of its unruly folk musics. The BLO is comprised of many talented and uncompromising musicians based in the Seattle area, including Composer Scott Adams and Captain Amy Denio. E. Grace Dager is the Visual Coordinator.

Please join us in the magical land of Boxitania. The evening will be recorded for posterity.