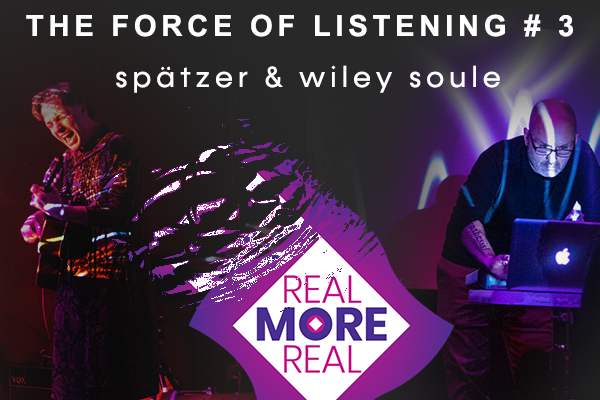 Spätzer is a creation from multi-disciplinary artist Aiken Bömers-Muller. Living through generative-based compositions, Spätzer’s sound designs balance the formalist approach of traditional ambient music with a tumultuous underbelly of chaotic sensibilities. Coming from a theater background, Spätzer focuses on storytelling through his music and performances. Some have called this post-ambient, some have remained silent. Muller is a part of REALMOREREAL and the artistic director of Radio Brennpunkt, a station focused on showcasing creative commons music.

wiley soule is Clayton, a Seattle based electronic musician, sound designer and voice artist who explores the infinitely rich, often tumultuous emotive open space at the nexus of noise, ambient, goth-industrial, bass, musique concrète and electroacoustic music. In his waking hours he also pursues a career in social work, fully committed to the healing and growth of others while chasing art as life through-theme. His debut EP, Been Midnight, can be found on Bandcamp and all other major platforms. His upcoming EP, Like Kaiju Vermin, will descend this spring, 2022.

The Force of Listening is a concert series hosted by REALMOREREAL sharing sounds and musical explorations of the potential of listening. This series shifts the focus from music as an end-point, to music as a dialogue for practicing the future. This dialogue begins with the artists’ investigation of a communal topic and continues as they “report” their findings through sound performance. File under experimental, avant-garde, and shit’s getting real.

In this performance, we invited Spätzer and wiley soule to explore the homeless epidemic in our nation, and Seattle specifically.

Spätzer took the hyper-focused route of studying and incorporating the works of Bill Jarboe, a Seattleite and musician who died unhoused in 2020.

wiley soule offers an aural meditation on the constraints common to the state of homelessness: the steady denial of access, the gauntlet of casual judgement cast by often still-housed peers, the losses that cascade in at a gale’s pace. This piece is an appeal to empathy, a casting about for the space where the outpaced grief can be shared and hope fashioned into something like real tenderness.

COVID-19 PROTOCOLS: King County & WA State have lifted their mandate requiring masks and proof of vaccination. Masks are optional for this event.