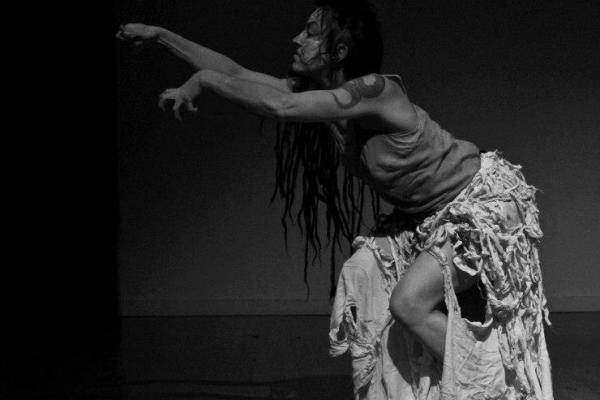 Celebrating nine years as frequent collaborators, noisepoetnobody and Vanessa Skantze return to the Chapel to further investigate the realm of Butoh/sound improvisation. Each has been deeply impacted in their respective disciplines by the others’ art form.

Vanessa’s early dance forays were with improvisational sound/movement ensemble Death Posture in New Orleans, and she has continued to work with improvisers such as Tatsuya Nakatani and Tom Swafford throughout her decade in Seattle. noisepoetnobody has created sound for nearly all of the Butoh artists in Seattle, both structured and improvisational works. In his journey of exploring sound for Butoh noisepoetnobody created the work The River, a vinyl-only release for which Vanessa wrote a choreography which accompanies the album. Her dance work Radiant Poison, which was commissioned by the Asheville Butoh community for their UWABE festival last fall, is scored to a recording of noisepoetnobody’s improvisational ensemble Epos Nemo Latrocinium.

Butoh/sound improvisation opens performer and audience to the multiple facets of deep listening: the sound draws one to listen and to feel one’s response and inner realm; the movement is a manifestation of the act of listening which in turn impacts the music. Ultimately the artists craft a space where one is, to quote Pauline Oliveros, “listening to listening itself” and witnessing the fruits of listening embodied.