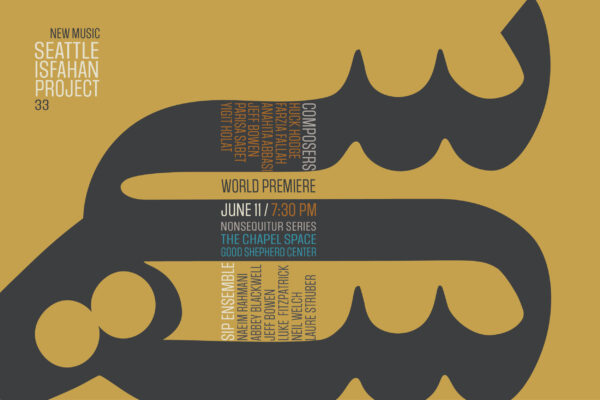 Naeim Rahmani, classical guitarist and Artistic Director of the Seattle-Isfahan Project, has commissioned new works by three Iranian composers living outside of Iran (Anahita Abbasi, Farziah Fallah, Parisa Sabet) and three Seattle composers (Jeff Bowen, Huck Hodge, Yigit Kolat) to draw attention to the water crisis that is happening now in Iran, particularly the drought that is affecting the Zayandeh-Roud, the river that gave birth to the city of Isfahan.

In the last decade, Iran has experienced severe drought tied to climate change. In Isfahan this has been most noticeable in the parched riverbed of the Zayandehroud river. The once flowing river cut across the landscape and carved timeless memories in people’s minds. The “Empty River of Life” ran under the historic bridges and for more than 400 years, the Se-o-se pol (Bridge of 33 Arches) made its motion and power visible. While the bridge is standing, the river is no longer running as it used to. One day it’s flowing and the next day it is literally gone. The future of the river, like the future of the country, is uncertain. This project is intended to both pay homage to the river and to raise people’s awareness about the drought and its impacts.

The project title 33 refers to the 33 arches that make up the most famous bridge across the river. As in the previous Seattle-Isfahan project, the compositions will again incorporate poetry, this time from the Iranian contemporary poet Sohrab Sepheri, whose poetry is closely tied to nature and man’s interaction with it. The ensemble includes Abbey Blackwell (bass), Jeff Bowen (guitars), Luke Fitzpatrick (violin/viola), Naeim Rahmani (guitars), Laure Struber (piano), and Neil Welch (saxophone).