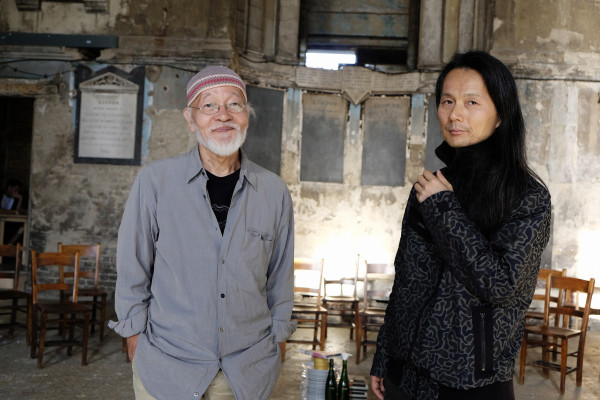 Though they differ in generation and performance practice, the NYC-based Aki Onda (b. 1967) and the Kyotango-based Akio Suzuki (b. 1941) share an astonishingly inventive, open-ended, and spontaneous approach to the infinite and variegated possibilities of sound. Since initiating a collaborative relationship in 2005, the duo have embarked on a number of tours in Europe and Asia, exploring site-specific locations ranging from an abandoned factory on the outskirts of Brussels to an underground parking lot in Glasgow. Suzuki and Onda released their first album ma ta ta bi on ORAL_records in 2014.

Onda and Suzuki perform by utilizing unconventional and self-made instruments including Walkman analog cassette players and radios, found pieces of wood, nails, hammers, buckets, marbles, and glass jars, allowing the individual architecture and acoustics of the various sites to guide the flow and development of the performances. The performance begins with the artists in the middle of the space, surrounded by the audience, before gradually moving throughout the environment as the performance unfolds.

Since the 1960s, sound art pioneer Akio Suzuki has been investigating the acoustic quality of selected locations and creating corresponding topographies. His intensive involvement with the phenomena of pulse and echo led him to develop his own instruments in the 1970s. One of these is the spiral echo instrument Analapos. It consists of a coil spring and two iron cylinders that function as resonating chambers, and is played with the voice or by hand. Starting from the 90s, his soundwalk project, oto-date, which means, respectively, “sound” and “point” in Japanese, finds listening points in the city, and playfully invites the audience to stop and listen carefully at given points on the map. Suzuki has been also active in the improvised music scenes in different continents, and has collaborated with Takehisa Kosugi, Derek Bailey, Peter Brötzmann, Steve Lacy, George Lewis, David Toop, and John Butcher.

Aki Onda is a New York-based artist and composer. He is particularly known for his Cassette Memories — works compiled from a “sound diary” of field-recordings collected by using the cassette Walkman over a span of last quarter-century. He creates compositions, performances, and visual artworks from those sound memories. Onda often performs in interdisciplinary fields and collaborates with filmmakers, visual artists, and choreographers, including Ken Jacobs, Michael Snow, Raha Raissnia, Akio Suzuki, and Takao Kawaguchi. Onda’s work has been presented numerous institutions such as MoMA, The Kitchen, documenta 14, Pompidou Center, Louve Museum, Palais de Tokyo, Bozar, and many others.

Presented by Nonsequitur, with tour assistance from Japan Foundation and SASSAS.