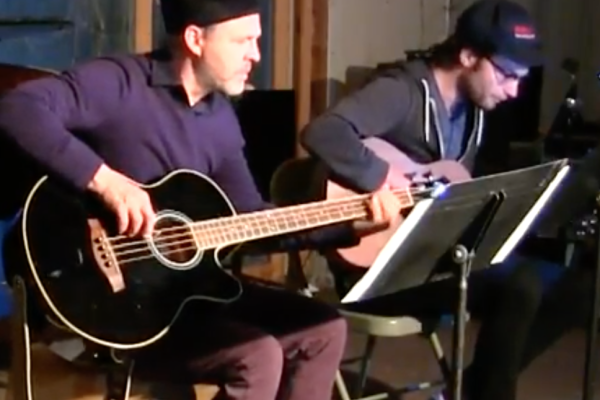 The Christian Asplund/Stuart Wheeler Duo is joined by Tari Nelson-Zagar for a set of newly composed experimental folk, followed by a set with the trio plus Tom Baker and the father-son percussion duo of Greg and Thomas Campbell.

Christian Asplund is a Canadian-American composer-performer based in Utah where he teaches at Brigham Young University. His interests have included the intersections of text/music, improvisation/composition, and modular textures/forms.

Hailing from Marysville and residing currently in Utah, Stuart Wheeler is an up and coming composer and singer whose inscrutable and soulful compositions and voice channel medieval polyphony, early American lining out, delta blues, etc.

Tari Nelson-Zagar is a third generation violinist and improvisor whose focus is collaborating with composers, choreographers, and other creative artists.

Performing on fretted and fretless guitars, Tom Baker has been active as a composer, performer and music producer in the Seattle new-music scene since 1994. He is the artistic director of the Seattle Composers’ Salon, and co-founder of the Seattle EXperimental Opera (SEXO). His most recent release, SAVE, with the Tom Baker Quartet, has garnered much attention and critical acclaim.

Greg and Thomas Campbell hail from a percussive dynasty originating in Bountiful, Utah. They are both equally comfortable in bebop and free improvisation and everything in between using drumset, found and artist-fabricated percussion, and traditional West African instruments.