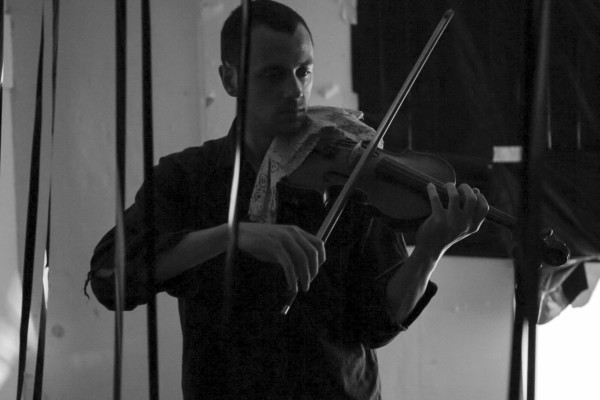 Austin Larkin and ensemble perform a composition of harmonics and tuned densities unfolding and persisting in time. Transmute states of variance and continuity are held, extended, measured through the vibration of strings and resonant bodies within a room. In the realization of this piece, a focus is placed on the ordering of tone, the diffusion of spectra, and congruences of silence.

Austin Larkin is an artist, composer and violinist focusing on in/audible forms and substances. Recently he lived in Yogyakarta to gain perspective into the architectural qualities of central Javanese karawitan, specifically how the tones dwell and unfold. Prior to this he studied composition at Cornish College of the Arts with Eyvind Kang, Jessika Kenney, and Jarrad Powell, all whose work and philosophy remain an influence. The violin remains a primary means for research as well as for the realization of his and others music. His work has been presented at festivals such as Yellow Fish, Umbral, and Corridor in addition to performing solo throughout North America, South America, and Asia. He currently lives on the traditional lands of the Coast Salish people in what is now known as Seattle.