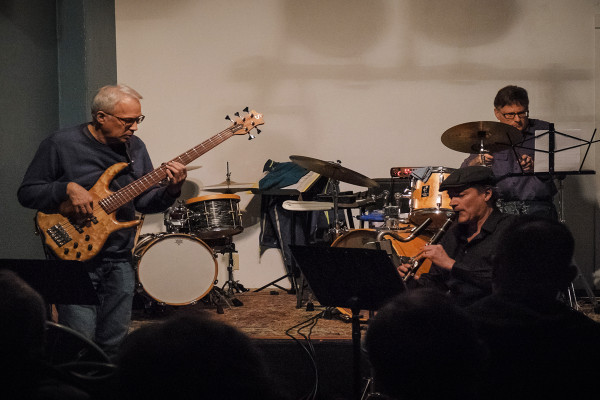 Ramen Trio uses the combination of composition and improvisation in order to make music in the moment and hopefully capture the listener’s imagination. Comprised of veteran Seattle musicians Jay Weaver (drums), Doug Lilla (bass), and James DeJoie (clarinet, bass clarinet), the Ramen Trio blurs the line between the written and improvised material. The trio sometimes improvises on forms, but also relishes making up a form as they go along. Their interplay depends on focused listening, and any member may “float to the top” at any time. Both DeJoie and Lilla contribute original music that mixes written material with improvisation and covers a wide swath of possibilities. They look to the past, present and future in hope of displaying their humanity through the language of music.

Jay Weaver and Doug Lilla first met when they played in Al Hood’s Aspects back in the 20th Century, and discovered their shared music interests. After a long period of each musician going down various paths through life, they began playing together again a few years ago. James DeJoie has joined forces with them in this new trio which seeks to make music live and breathe through composition and improvisation.