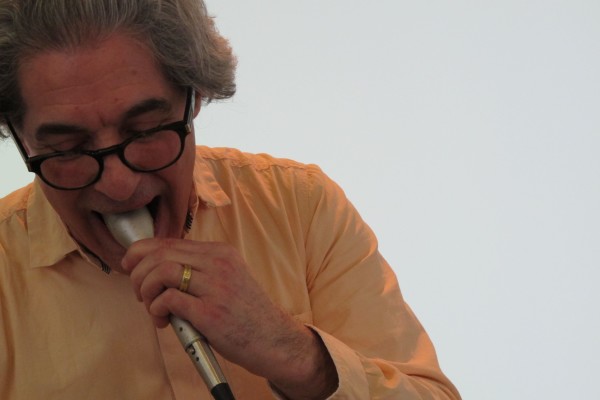 Lou Mallozzi (Chicago) is an interdisciplinary artist who dismantles and reconstitutes sounds, images, gestures and language to examine relationships between presentation, representation, knowledge, power, and site. His work is primarily based in sound and takes the form of installations, performances, fixed media works, and improvised music. During more than three decades of interdisciplinary arts practice, he has performed, exhibited, and broadcast in many international venues. He was director of Experimental Sound Studio from 1986-2016, and is currently Assistant Professor and Graduate Program Coordinator in the Sound Department of the School of the Art Institute of Chicago. Tonight he presents an evening of solo sound performances intertwining language, objects, vinyl, whistling, and microphones to explore representation, power, and sound. Among the works presented are La patria partorisce padri partiti, which deconstructs Italian fascist texts through controlled microphone feedback, and Arc, in which the eyes drown in a sea of stardust.

Gyre (Seattle) is an experimental electronics trio of Michael Shannon, David Stanford, and Carl Lierman, formed in January of 2012. Their working method relies on the use of non-standard configurations of a wide cross-section of analog and digital electronics. They create discrete circuits between these elements that, while they can sustain sonic form, are not always stable. Sounds generated entirely with oscillators, internal and external feedback circuits, simple sound generators, microphone captures, digital processing, forming swirling loops of sound layers. Their work is informed by the concept of the gyre, the conical helix or spiral of atmospheric phenomena, and the ideas explored by W.B Yeats. Yeats’ vision of the gyre described it as cycles of creation and disintegration that he used to analyze a variety of subjects from human consciousness to historical patterns.