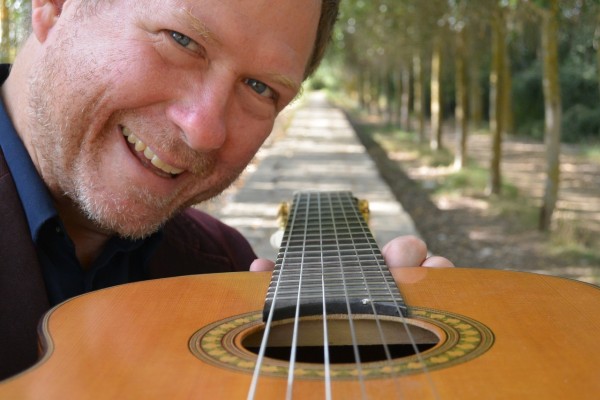 Passionate playing with clear technical command and a compelling story behind each composition are what guitarist Mark Hilliard Wilson brings to the stage. Performing regularly at festivals and concert series through out the greater Northwest, Wilson has distinguished himself as a unique voice with programs that feature his own transcriptions of new works for the guitar, and is privileged to have had a number of works written for him by composers such as Mesut Ozgen, Michael Timpson, Charles Atwood, Nathen Jensen, Jim Clarke and Paul Messler. Wilson’s performing career has taken him to Carnegie Hall’s Weill Recital Hall with the new music group Ensemble Sospeso to concert halls across the US. Wilson’s compositions for the guitar have been appearing on stages throughout the Northwest US and Canada for over 15 years. The main medium he works in is the relatively unexplored genre of multiple guitars or Guitar Orchestra. Wilson is the conductor, composer, arranger and music director of the Guitar Orchestra.

Tonight’s concert is an exploration of opposites. The first half is for solo guitarist dutifully following the instructions given by the composers 63 and 53 years ago. The second half is for a growing ensemble of players that will be alternately improvising freely and following a very open set of instructions.

What are the edges of communication and what can be learned from working diligently to preserve one’s ideas in corporeal form verses giving a set of instructions? The scope of this inquiry is so large that it is impossible to get more than a glimpse of an answer with this one night. That said, Mark has chosen pieces that feature the ideas of towering figures of history in the first half and some of the best improvisers and musicians he has had the privilege to know.