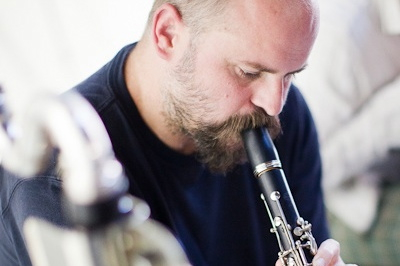 Reviled for his “shapeless sonic tinkering” by the Los Angeles Times, Matt Ingalls is a composer, clarinetist, concert producer, and computer music programmer based in Oakland. Often incorporating elements of improvisation, his music is heavily influenced by his long involvement in computer music. His composerly solo improvisations explore extended clarinet techniques that interact with the acoustic space, often as combination tones. Matt is the founder and co-director of sfSound, a new music series, ensemble, and internet radio station devoted to new ideas and traditions of experimental music, performance art, live electronic music, Bay Area composition, and the various facets of contemporary improvisation.

Greg Kelley has performed throughout North America, Europe, Japan, Argentina & Mexico at numerous festivals, in clubs, outdoors, in living rooms, in a bank, and at least once on a vibrating floor. He has collaborated with a number of musicians across the globe performing experimental music, free jazz and noise, appearing on over 100 recordings in the process. He constantly seeks to push the boundaries of the trumpet and of “music.”