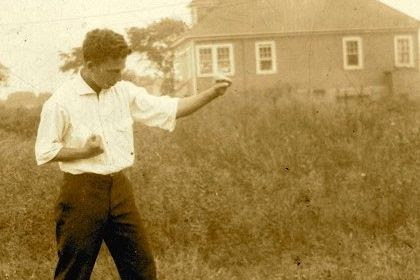 Jen Gilleran was invited to record with Allison Miller and Gregg Keplinger the week she arrived in Seattle from Costa Rica (before that Denver, before that NYC). It was a powerful and cinematic experience. The Racer Sessions offered her another unique introduction to a community of brilliant improvisers and composers and the band GRID was formed. With over 15 on the roster, GRID performed live to the films of Fritz Lang (Metropolis), Buster Keaton (Cops and Playhouse), Robert Enrico (An Occurence at Owl Creek Bridge), Ilya Chaiken (Matchflick), Maya Deren (At Land) and many others at such notable venues as the Northwest Film Forum, Henry Art Gallery, Vermilion, Racer Cafe, The Chapel, Central Cinema, The Royal Room, and the UW Planitarium.

Nineteen Crimes is Gilleran’s latest manifestation of all the images and sounds that swirl in her head and in her garage. This will be the second installment of her trilogy at the Chapel. Joined by one of her favorite drummers, Chris Icasiano, the duo will accompany film and will be followed by the band Red Fable with Rich Hinklin (bass/guitar), Dennis Rea (guitar), and Don Berman (drums.) It promises to be a powerful evening of sound and film in this beautiful space.