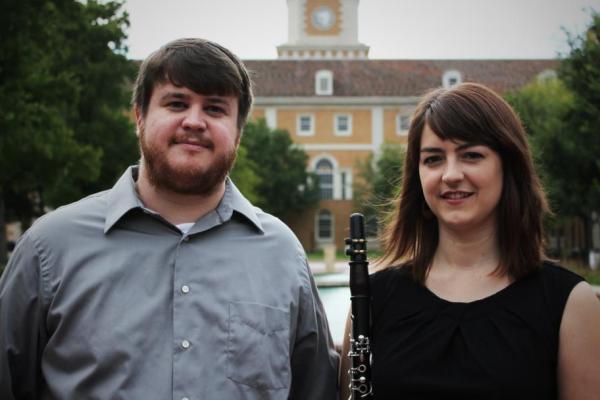 Odd Partials presents a concert of experimental interactive music together with Marcin Pączkowski.

Formed in 2011 and recently transplanted to Seattle from Denton, TX, Odd Partials is the duo of clarinetist Rachel Yoder and composer/computer musician Greg Dixon. They perform pre-composed interactive compositions by a variety of composers, as well as live improvisations. Recent appearances include the University of Wyoming’s New Frontiers Festival, the 2013 Society for Electroacoustic Music in the U.S. (SEAMUS) conference in St. Paul, and the upcoming International Computer Music Conference in Denton, TX.

On the program are Dixon’s synth-inspired work Fractures, Solo for Clarinet with Delay System by renowned clarinet pioneer William O. Smith, Pączkowski’s improvisatory bass clarinet and electronics work Study 2012 – There and …Where Odd Things Are Kept, an accelerometer-based interactive work performed by Pączkowski. The three musicians will then collaborate on a live improvisation incorporating the software systems from both Fractures and Study 2012 – There.

Greg Dixon works as Assistant Professor of Music and Sound Design at the DigiPen Institute of Technology in Redmond, WA, where he teaches courses in sound design and music composition. His compositional research focuses on interactive music systems for video games, acoustic instruments, sensor technologies, and human interface devices. Greg holds a Ph.D. in composition with a specialization in computer music from the University of North Texas.

Rachel Yoder is a versatile clarinetist and bass clarinetist based in the Seattle area. She currently performs with the Madera Wind Quintet, the Seattle Modern Orchestra and the Odd Partials clarinet/electronics duo, and has also performed with Sounds Modern (Modern Art Museum of Fort Worth), the Dallas Festival of Modern Music, and at conferences of the International Clarinet Association and Society for Electroacoustic Music in the United States (SEAMUS). Rachel works as editor of The Clarinet, quarterly journal of the International Clarinet Association, and adjunct professor of music at the DigiPen Institute of Technology in Redmond, WA.

Marcin Pączkowski is a composer, conductor, and performer, working with traditional and electronic media. He received his Masters’ degrees from the Academy of Music in Kraków, Poland, where he studied with Wojciech Widłak (composition) and Rafał Delekta (conducting), and from University of Washington in Seattle, Washington, where he studied composition and computer music with Juan Pampin and Richard Karpen. Currently he is a doctoral student in the Center for Digital Arts And Experimental Media (DXARTS), where he studies with Juan Pampin. His current research is focused on exploring ways of engaging computer media in improvisation, as well as motion tracking and machine learning techniques used for creating and controlling musical structures.