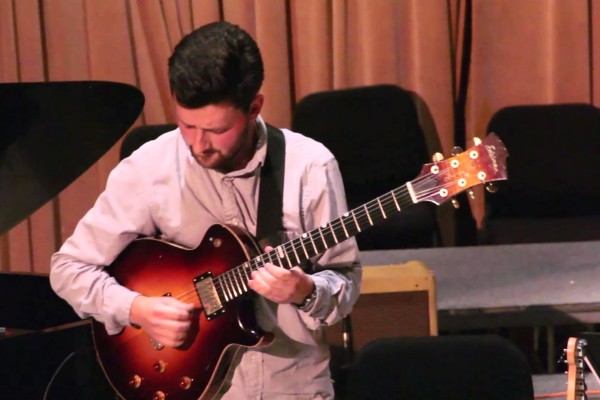 Composer and guitarist Ronan Delisle introduces his most recent project. Cosmic Punishment is Delisle’s attempt to marry extremes: the acoustic integrity and organic nature of instruments like the arch-top guitar and double bass with the synthetic, infinite nuance of the synthesizer; through-composed and specific roles with indeterminate and flexible improvised textures. While being guitar-centric in its roots, Delisle’s group also features the fluidity of drummer Mike Gebhart and the versatile Abbey Blackwell as the group’s backbone, providing the foundation of the band’s sound. Delisle originally drew influence for Cosmic Punishment from the “Harmolodic” approach of Ornette Coleman and the group dynamic of the Bad Plus, with which he has infused with his own love of American roots music and the symmetry of past masters J.S. Bach and Frederic Chopin.

He will be followed by guitarist and UW professor Ryan Ferreira, performing immersive solo guitar works.