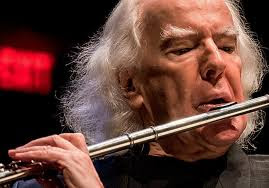 This concert stars legendary flutist, composer, and conductor Robert Aitken. Instrumental in developing the playing of the modern flute, Aitken has worked with numerous composers such John Cage, George Crumb, Elliott Carter, Toru Takemitsu, and Iannis Xenakis, to name a few. In this unique collaboration with SMO, Aitken will be playing some of his own music and Toru Takemitsu’s Bryce, and conducting works by Iannis Xenakis and Canadian composer Brian Cherney.