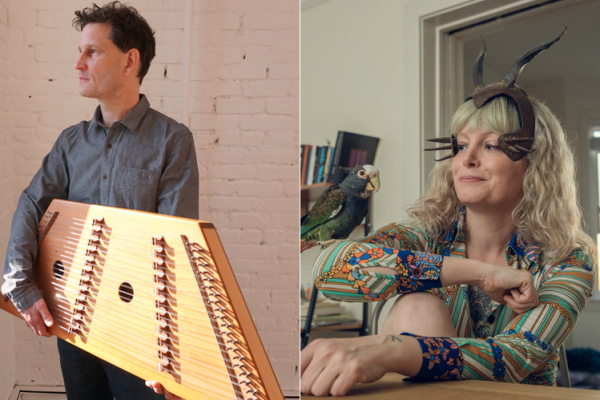 A shared evening of electronic and electroacoustic music with recent Seattle transplant Blevin Blectum (Bevin Kelley) and New York-based composer Dan Joseph. Blectum will present a new set of electronic pieces, while Joseph will present Dulcimer Flight, a long-form work for hammer dulcimer and electronics informed by acoustic ecology, ambient music and early minimalism. The evening will conclude with an impromptu collaboration.

Blevin Blectum (born Bevin Kelley) is an electronic musician and multimedia artist whose work explores “polyphasic avitronic wordless sonic worldbuilding.” Currently based in Seattle, Blevin is perhaps most best known as one half of the recently reformed and reunited groundbreaking digital duo Blectum From Blechdom (with Kevin Blechdom aka Kristin Erickson) who received the 2001 Ars Electronica Award of Distinction in Digital Musics for their album The Messy Jesse Fiesta. In 2013 she co-founded the electroacoustic-radioplayers The Traveling Bubble Ensemble with fellow sci-fi enthusiast and sibling Kelley Polar (Michael Kelley). Left to her own devices, Blevin produces turbulent electronics with a more oblique slant on the basic BFB sensation of things-not-quite-right-here – clanking, creaking grooves and anti-grooves as a coal-powered spacecraft from some post-steampunked parallel universe potentiality. She can be heard in radio plays, electronic toys, theater spaces, film/television scores, advertisements, clubs, concert halls, headphones, and galleries. She has releases on labels including Aagoo, Estuary Ltd., Tigerbeat6, DeluxeRecs, Praemedia, Vague Terrain, and Phthalo. (photo: Carlos Cruz)

Dan Joseph is a composer, performer, writer and curator based in New York City. For the past fifteen years, the hammer dulcimer has been the primary vehicle for his music and he is active as a performer with his own chamber group, The Dan Joseph Ensemble, as well as in various improvisational collaborations and as a soloist. He produces the monthly music and sound series Musical Ecologies in Brooklyn, and is a contributing writer to The Brooklyn Rail, Musicworks Magazine and NewMusicBox.org. In 2017, the venerable New York based new music label XI Records released a 2 CD retrospective of his electroacoustic and mixed-media works titled Electroacoustic Works. (photo: Claudia Joseph)