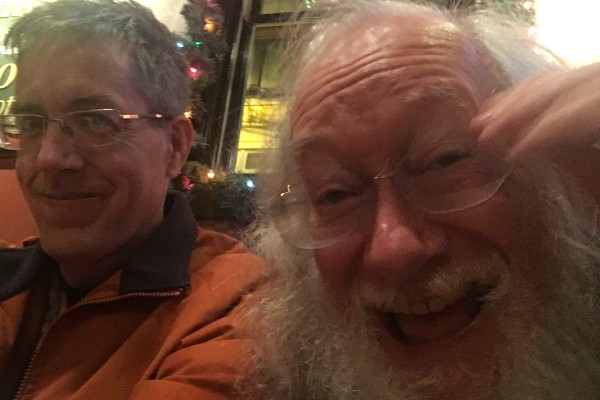 David Wills (aka The Weatherman), founding member of experimental media collective Negativland, makes his first appearance on a concert stage in seventeen years to join recent Negativinductee Jon Leidecker (aka Wobbly) for an evening of fake electronics, microphone-activated iPhone apps, local baby room monitor interceptions and endlessly awkward questions for Alexa. Don’t take the risk that any of the sounds that occur on this evening are going to be recorded, every click-through agreement you’ve ever complied with to the contrary — this is going to be a live performance.

David Wills has been recording odd environmental sounds since the late 1960’s, creating unique electronic instruments such as the pure electrical feedback oscillator ‘The Booper’ since the early 1970’s, scanning unshielded police, cell phone and baby room monitor transmissions since the 1980’s, and living in Seattle since the turn of the millennium. He joined Facebook, Twitter and Instagram earlier this year. He is a co-founder of the experimental media collective Negativland.

Jon Leidecker has been producing music under the name Wobbly since 1990. Recent performances deploy a battery of mobile devices driven by their built-in microphones, reacting instantly with error-prone variations on the notes and sounds they believe they are hearing: a tightly-knit orchestra with inhuman reflexes, resulting in musical structures which the human performer influences more than controls. Wobbly’s live and studio collaborations with Negativland, Dieter Moebius & Tim Story, Matmos, Fred Frith, John Oswald, Thomas Dimuzio, Huun-Huur-Tu, Sagan and the Freddy McGuire Show compliment live mix media collages executed twice a month on Negativland’s Over The Edgeradio program on KPFA-FM.