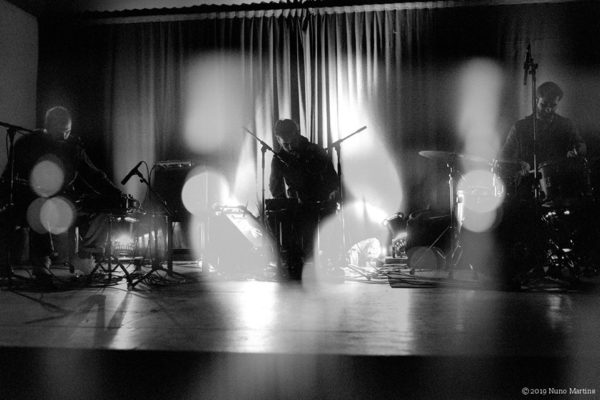 Lisbon’s Alforjs is like a strange bag on the back of the mule of the almocreve [itinerant trader], filled with assorted artifacts and relics accumulated while encountering various landscapes, traditions and rituals. Deformed from the swelling caused by so many collected cultural objects, its original weft is what unites all these references and transports them to another existence in a new form. Alforjs have always aimed to make non-referential music away from a mimicry of watertight musical genres, aiming to create idiosyncratic music with a deep and direct relationship with the context in which the band is inserted – a reflection of the cauldron of disparate influences that is Lisbon in the 21st century, from the most avant-garde jazz, to the darkest and most peripheral dance music, to noise, to electronics and electroacoustics.

Bad Luck performs in another cosmos from most bands. With more than a decade of collaboration, Neil Welch (saxophone + live electronics) and Christopher Icasiano (drums) “bear down on you like a cyclone of fire” (The Stranger). Based out of Seattle, Bad Luck is a genre-defying supernova of electronics, metal, folk and jazz. Their new album, Four, recorded at Avast Studios with Randall Dunn (Sunn O))), Earth, Marissa Nadler) slams the epic energy of free improvisations into shorter, rhythmic forms. Welch screams and breathes into his horn, acoustically creates chords, and uses electronics more familiar to guitar players. Icasiano does things that seem impossible with four drumsticks at once. “Outside of music’s commonly accepted beat exists an emancipated, implied meter, an empowered and truly free human expression.” – CityArts

Watch video of the sets by Bad Luck and Alförjs, thanks to elhotrod32.