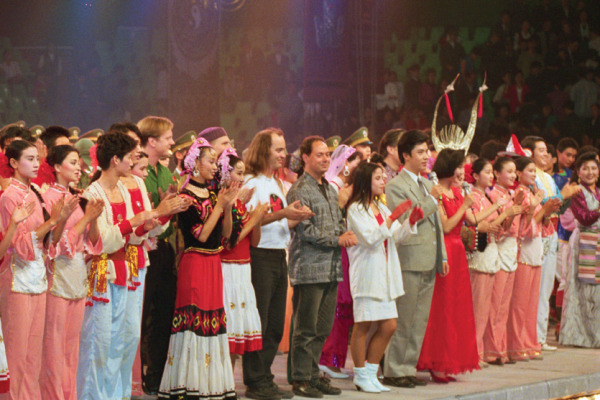 Longtime Seattle musician Dennis Rea celebrates the republication of his book Live at the Forbidden City: Musical Encounters in China and Taiwan with a reading plus a musical performance of Asian-themed works by his group Moraine with special guest Stuart Dempster. (A sliding scale donation at the door includes a copy of the book.)

Now available in a newly updated Blue Ear Books edition, Live at the Forbidden City offers a singular look at the rapidly evolving Chinese popular music scene, as seen through the eyes of one of the first progressive Western musicians to perform extensively in both China and Taiwan. In the 1980s and 90s, American musician and author Dennis Rea was an unofficial musical ambassador to the East, playing more than 100 concerts in venues ranging from sports arenas to illicit underground nightclubs to TV broadcasts viewed by millions of Chinese – frequently under bizarre circumstances and the constant threat of harassment by Communist Party authorities. Spiced with informative reflections on Chinese music and culture, Live at the Forbidden City interweaves vivid, often comical depictions of Rea’s musical adventures with an insider’s look at China’s emergent rock music phenomenon, richly descriptive tales of travels in China’s ethnic minority regions, and the first detailed English-language eyewitness account of the violent civil uprising that broke out in the city of Chengdu at the same time as the world-shaking events at Tiananmen Square.