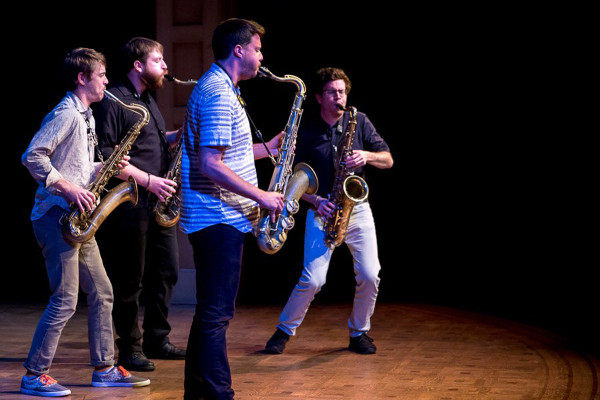 This tenor saxophone quartet weaves together complex and ethereal sonic landscapes. Their most recent album, Blade of Love, is a three-part composition devoted to the “physical and spiritual intersection of the saxophone and the human body,” with the quartet boldly experimenting with conventions to make their instruments extensions of their inner selves. Presented by Earshot Jazz.

The origin story for Battle Trance is one of obeying an insistent inclination. In 2012, Vermont/Brooklyn hornsmith Travis Laplante followed a mysterious feeling to get in touch with three wildly talented near-strangers – Patrick Breiner, Matt Nelson, and Jeremy Viner – to piece together an experimental saxophone band. The project launched with an exploration of circular breathing and a sonic connection surrounding the four players. Since, it has been the platform for two records and highly anticipated international concerts. Following in the footsteps of groundbreaking idiosyncratic saxophonists Evan Parker, Albert Ayler, Peter Brötzmann, Roscoe Mitchell, and John Butcher, Laplante and the band explore multiphonics and singing into their instruments while exhaling to result in shifted vocal timbres. Laplante explains that by integrating non-traditional methods, his instrument is allowed to act as a resonant chamber to imitate sounds, such as arrows flying through the air, singing in church, running water, and the sound of rage.