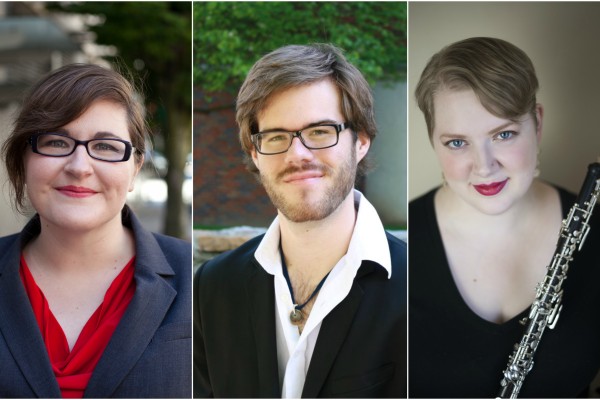 Ursula Sahagian, Melanie Voytovich and friends perform contemporary music for oboe, percussion, and fixed electronics featuring the world premiere of Tyler Kline’s Collapsing Geography, for oboe and marimba, as well as his Two Songs After Dylan Thomas. Other works on the program are om Empirischen Standpunkt, by Emily Koh; Soda Apple, by Viet Cuong; Flowerpot Music No. 1, by Elliot Cole; De La Madera, by Howard Buss. There will be a pre-concert talk at 7:30.

​O​boist Ursula Sahagian​ ​is dedicated to realizing the works of living composers. ​In large and chamber ensembles, she has premiered over twenty​-five​ works, and has been independently commissioning composers to write new solo and chamber works for oboe since 2015.​ She regularly performs with Seattle Modern Orchestra, Seattle Rock Orchestra, and Seattle Metropolitan Chamber Orchestra. This year, she is looking forward to performing with the Sound Ensemble at NUMUS Northwest, joining new music ensemble Cursive for their March performance, and premiering a new work for oboe and strings by Phil Salath​é​.​

​Percussionist Melanie ​Voytovich has performed with new music ensembles including the Universal Language Project, Seattle Modern Orchestra, Plexure Trio, and the Sound Ensemble. Dedicated to encouraging innovation and collaboration, she pioneered the Washington State New Works for Percussion project, focused on commissioning new repertoire for percussion. She is also the Chapter President of the Washington State Percussive Arts Society and is currently working to expand its reach and influence throughout the state.​ Melanie is​ currently pursuing her DMA at the University of Washington.

​Composer ​Tyler Kline​ of Tampa, FL​ writes music encompassing​ a wide variety of styles and mediums, including acoustic chamber and large ensemble works; solo and duo works; fixed and interactive electronic/electroacoustic music; and collaborative projects with dance, visual and literary arts. ​​Recent compositions​, including Collapsing Geography,​
focus on the use of extended sounds/techniques in order to create timbral similarities or differences, as well as textures, between instruments, voices and/or electronics. Tyler’s work is deeply influenced by the idea of Wabi-Sabi, a Japanese aesthetic and world view that values transience, imperfection, and impermanence. More broadly, his compositions draw influence from a variety of extra-musical sources, primarily from literature.