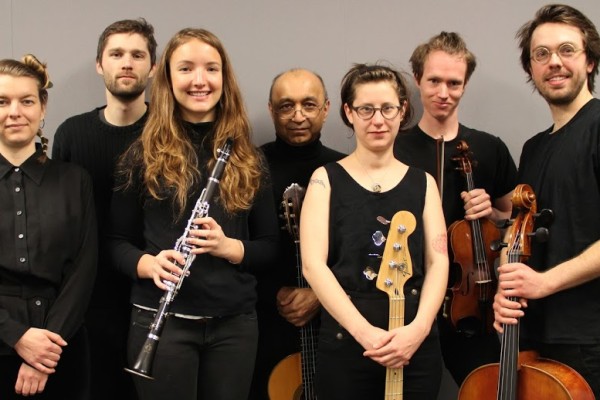 Voices Left: Experiments in Music for Computers, Instruments and Voices is an evening of computer music and ensemble works from Herbert Brün, Arun Chandra, Mark Sullivan, Susan Parenti, and their students accompanying a performance of Kenneth Gaburo‘s Maledetto.

Maledetto, a choral piece for seven speakers on the subject of the ‘screw’, with its many connotations. Gaburo explodes this single word into a world of activity: a darkly murmuring congregation, a cocktail party, a drunken gambler swearing up from the gutters, and the frantic screams of a football game. The words are split into phonemes and stretched into long hisses and gasps as the tempo presses, releases, presses and releases, again and again until every bit of meaning is pressed out. And then it begins again. All this is alongside a methodical, rational and exhaustively researched lecture on the history, technology, nomenclature, regulation and economy of the screw. The piece presents the attitudes of a society which screws, which is screwy, and which leaves many completely screwed over.

Accompanying Maledetto is a set of pieces for two-channel playback, quartets for guitars, violin, and cello, and Infraudibles for electronic sounds and instruments (one of the first compositions for live performers with recorded sounds). All of these works share a link to the music and teaching of composer Herbert Brün (1918 – 2000). An activist, teacher, composer and poet, Brün cared for and thus criticized the society of which he was a part. Our performances and compositions are based on the premise that the creation of a new society cannot come without a revolution in the arts.