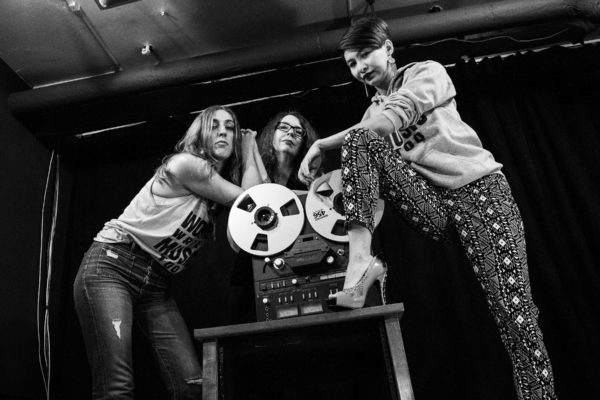 Kin of the Moon will present a new commission, No house on fire, no. by Seattle saxophonist/composer Neil Welch, with Abbey Blackwell, bass. KOTM encores composer Ewa Trębacz’s Winter After Times of Fire. KOTM will also premiere Leanna Keith and Em Piro’s interactive work “imagination is an act of rebellion”. Thanks to 4Culture for their generous support.

“No house on fire, no. for improvising quintet explores phonetic text painting and my reflections on physical landscape. Through this piece, I attempted to channel the collaborative spirit of Kin of the Moon — a virtuosic ensemble committed to engaging in creative dialogue with one another. Throughout this piece you will hear breathing, undulating wind currents, unified melodic passages and solos for each member of the ensemble. It was composed from late 2017 through early 2019. After initially completing the piece in late 2018, I was inspired to re-compose major sections after a journey through the mountains and valleys of New Zealand. While in country in early December, 2018 I traveled to a remote location in the central South island. With a crew of traveling companions I walked among tall, dry grass waist high that rolled unbroken over hill after hill throughout a 2 day journey. As the wind picked up the grass would take on new forms, winding and coursing in every direction around me. In these long days a new vision of this composition began to take form in my mind.

The work is segmented into four sections (Introduction, I, II, III) and is intended to progress between sections without pause. All instrumentalists use extended techniques to create undulating sounds of air and wind through various means, such as: fingers sliding on the keyboard with plastic picks, flute and saxophone blowing directly into their instruments without engaging pitch, bows sliding on the body of the instrument, amplified bow swirls and pulls, feet and hands brushing against the floor, clothing, or instrument. The work is dominated on the whole by graphic score language I developed for the piece, however many selections are also notated in pitch. These notated passages are often dichotomous in their pitch content, blending tempered and non-tempered tuning. No house on fire, no. is a work that must be sonically sculpted by each member of ensemble in order to bring the composition to completion. The rhythms and phrasing are taken from the poem Drawn Together, by Joan Naviyuk Kane. The poem is reinterpreted throughout the duration of the composition.” — Neil Welch

Shot through with white, error—
A dream of birds of prey returned
Dropping glyptics, baskets.

Last night’s lopped moon
Couldn’t put into words
The ink around it.

Ache. No carrion bird
Blown into the city,
No house on fire, no.