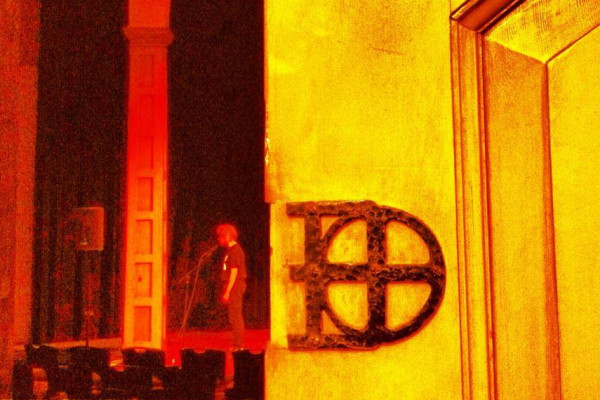 “Lift we our ears, eyes of the darkness”—James Joyce, Finnegans Wake

Finnegans Wake is a feast and a light for the ears. The author’s response to those mystified by its incessant densely layered puns, portmanteaus, non-English vocabulary and the occasional hundred-letter “thunderclap”: Read it aloud, and enjoy the music.

As a twenty-something music theory grad student, and never much of an aficionado of fiction, Finnegans Wake grabbed me, and never really let go. On my first acquaintance with its opening pages, I felt that this was not like literature that one “reads;” it had more in common with a piece of music that one learned a little at a time, hands separately, slow tempo at first, carefully working out tricky rhythms, figuring breathings, bowings and fingerings. After dedicated and patient practice, one would ultimately be rewarded with the satisfaction of finally hearing the music embedded in the notation, or in the case of Joyce’s novel, the words and punctuation.

So when I perform the Wake’s second chapter, it’s not intended as a feat of memory or of physical or mental endurance: I simply want my audience to hear its music; to experience a text which is definitely (and intentionally) obscure as far as what’s going on story-and-character-wise, but delightfully direct in its comic, enchanting, lyrical, emphatically musical beauty.

Our staging of the Wake is entirely in the service of making that beauty accessible. As Joyce often likened his book to the night, and its difficulties to trying to see in the dark, the performance will take place in the dark (with occasional flashlight illumination). Finnegans Wake is a dream, a wandering through caverns of the unconscious, and so we have attempted to re-create the reverberation and echo of those caverns with a carefully-composed sound design executed by Jake Thompson. Joyce’s novel is preoccupied with the experiences of reading and writing themselves, and their history, so we have made an ancient manuscript, beautifully rendered by Sarah Colburn, occasionally visible in flashes to reinforce that element. The pomp and mystery of sacred books and rites permeate the Wake, so our staging attempts to resonate with its ritual, including the use of a celebrant’s robe made for the occasion by Karen Eisenbrey. This performance is a part of our ongoing Finnegans Wake Project. Stay tuned next year for Chapter 3!