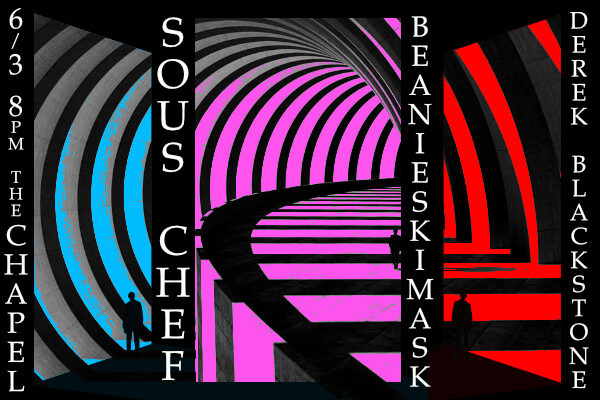 A culinary artist of audio food, sous chef (Antoine Martel) uniquely blends modular synths, classical & film inspired pianos, strings, and horns as well as experimental sounds & music concrete style sampling, mixing together both highly composed an totally improvised pieces in an attempt to explore vast cosmic landscapes of undiscovered sounds. Sous chef has been creating for almost a decade now, crafting a wide variety of musical experiences and experiments. Over the last few years, the project has been refined from a chaotic solo brainstorm to a more focused vision of what sous chef can be. This will be the debut performance of the new material. The old stuff has been slowly and quietly removed from the internet, creating the space for a re-birth. Come see what new creations this audio chef has been cookin’ up.

Beanieskimask is Victory Nguyen, who plays with High Pulp and Eams. Channeling emotions and musical storytelling with woodwinds and electronics. Open to being inspired and influenced by all music and art. Derek Blackstone is a living composer. Who produces sound by acoustic and electronic means. Who creates soundscapes for movement and installation. Who reaches sonic heights with the pious duo UNITY GARNISH. Together they will enter a boundless sonic playground under the supervision of the Great Creator, guided by Intuition, and entrusted to spontaneous Creation. The duo have moved toward transcendental musical expression since time immemorial and are thrilled to make their debut performance at the Chapel.