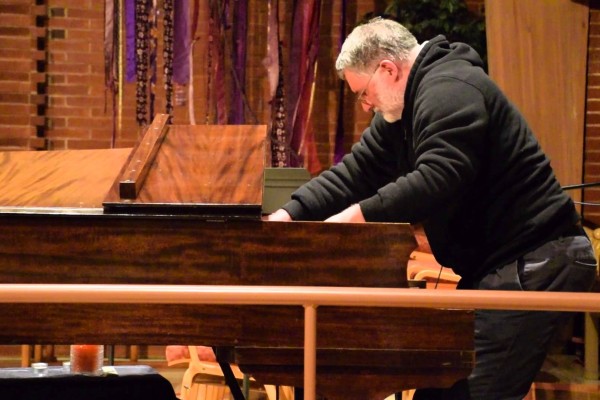 Sounds, Found is a “garbage piece” for pre-recorded found sound (most of it recorded in August of 2012) and a stage full of found objects as percussion. The piece, in twenty-one short movements, explores the similarities, differences, and connections between the concepts in the continuum of what are commonly called noise, sound, and music. The prerecorded parts and live playing are separate layers that only occasionally connect, adding another layer to the piece’s conceptual framework. And, in addition to all that intellectualizing, it should be a lot of fun.

Keith Eisenbrey will also perform his set of Twenty-Four Preludes for solo piano.

S(teve) Eric Scribner studied composition with Lockrem Johnson. He has lived in Seattle, the San Francisco Bay Area, and Japan, with premiers of many of his pieces in each of those places. Many of his recent compositions have been part of an extended series for guided improvisation over pre-recorded sound. These include (The) Nature (of) Sound (an installation with interactive sound, presented at Jack Straw New Media Gallery in 2014), and the day-long StormSound Cycle (for twelve musicians and prerecorded sound). Sounds, Found is shorter, denser, and generally less ambient than these two earlier pieces.