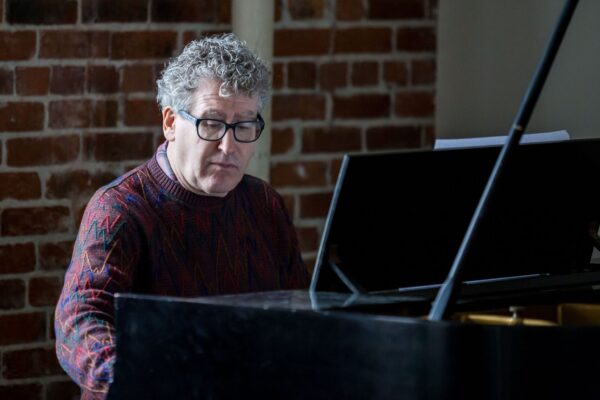 Neal Kosaly-Meyer is a composer and performer living in Seattle. He continues work on Gradus and hopes to present in-person performances again before too long. He is also memorizing and performing chapters of James Joyce’s Finnegans Wake, and has presented a new chapter annually at the Chapel since 2014. During lockdown he has been performing chapters on Facebook, and will perform three more between September and December. He is a founding member, with Keith Eisenbrey and Aaron Keyt, of Banned Rehearsal, an ongoing argument in creative expression. He and Karen Eisenbrey record and perform as the rock group Your Mother Should Know.

Gradus: for Fux, Tesla, and Milo the Wrestler – Three Rungs

The concise version of the score is “learn to play the piano one note at a time.” Since 2002, Neal Kosaly-Meyer has been devoting extended improvisation sessions to each single pitch on the piano, and then to systematically selected combinations of those pitches. So far he has worked through the A’s, E’s, C#’s, G’s and B’s, and is about halfway through the D’s. In performance three “rungs” are selected, one dedicated to a single pitch, one to two pitches, and one to three or more pitches (in the present case, ten pitches were chosen for the final section). Silence, in John Cage’s understanding, is always full of sounds, and is always an integral part of Gradus, and of equal importance with the notes played on the piano. At the session for this performance Julie Cascioppo had walked through the Chapel, unaware that a recording was in progress. Special thanks to Julie and her cat Baci for their contributions, along with the birds, dogs, outdoor musicians, sirens, planes, traffic and wind which are all very much a part of this music.