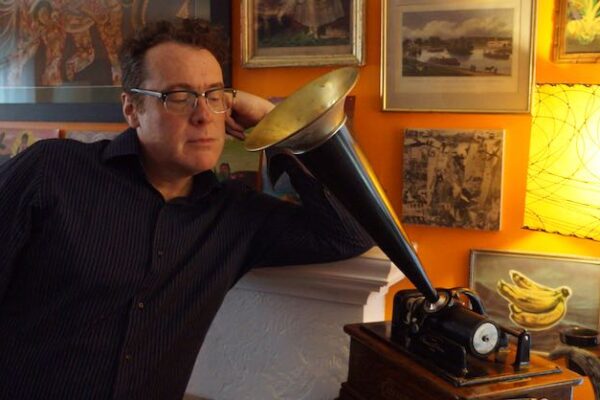 A sound artist, Fulbright scholar, and Guggenheim fellow, Robert Millis has authored or co-authored books (Indian Talking Machine and Victrola Favorites) produced compilations and documentaries for the Sublime Frequencies record label, (including Paris to Calcutta: Men and Music on the Desert Road and This World is Unreal Like A Snake in a Rope), composed for radio (“The Gramophone Effect” for Documenta14) and film (the cult horror film Session 9), and released numerous recordings as a solo artist, as Climax Golden Twins, as Telescoping or as Idol Ko Si. Recently he was part of A Slightly Curving Place at Berlin’s Haus der Kulturen der Welt.

This work is about wind up gramophones, Victrolas and Edison cylinder players. I use them as chambers for feedback resonances alongside deconstructed fragments of 78rpm records, and reconfigured surface noise. Related to my Related Ephemera LP, recently released on the Helen Scarsdale Agency, it’s about fragility, overtones, texture, and memory; an insomniac falling asleep.

A few found sounds, a Japanese sho, and a guitar make appearances, but otherwise all the sounds were derived from old phonographs and recordings. Some sections were performed live, and some assembled in my studio. Ko Ishikawa played the sho.