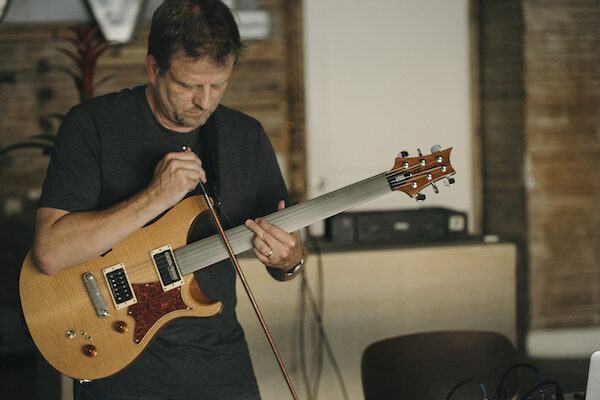 Tom Baker is a composer, guitarist, improviser, and electronic musician, active in the Seattle new-music scene. His compositions, from operas and avant-jazz to chamber and electronic music, have been performed across the US, Canada, and Europe. As a performer and improviser, Tom specializes in fretless guitar and live-electronics. His band TRIPTET recently released its fourth album, Slowly, Away, on Engine Records. His electronic-interactive-arts collaboration with visual artist Robert Campbell, was featured in the MoxSonic Festival in 2019 and the Currents Virtual Festival in 2020. Tom is a Professor of Music at Cornish College of the Arts where he teaches composition, music theory, and electronic music. (photo: Jessa Carte)

The four pieces that make up this recording are part of a series of works entitled Traces. One might consider them ghost stories. In my youth I was obsessed with Harry Houdini, especially his interactions with Sir Conan Doyle, and their arguments about spiritualism and the paranormal. From there I stumbled onto the practice of EVP (electronic voice phenomenon). As a young person with an obsessive relationship to sound and access to a reel-to-reel tape recorder, this seemed to give my life a purpose: to find and record “invisible” sounds and otherwise unheard voices. These four works for performers and interactive electronics are a remembrance of that period in my life, each a meditation on loss, grief, and memory. They are a search for what remains in the absence of known things, real things, loved things. They each began as an incantation, a conjuring, giving voice to the inaudible and form to the imperceptible. What emerges are traces and remnants of people, spaces, and memories – requiems for things lost. These works were to be performed at the Chapel Performance Space in October 2020 in a live performance (which was lost to Covid-19). They are now actualized here on the Wayward in Limbo series. “Traces:Sarah” was commissioned by Melissa Achten.