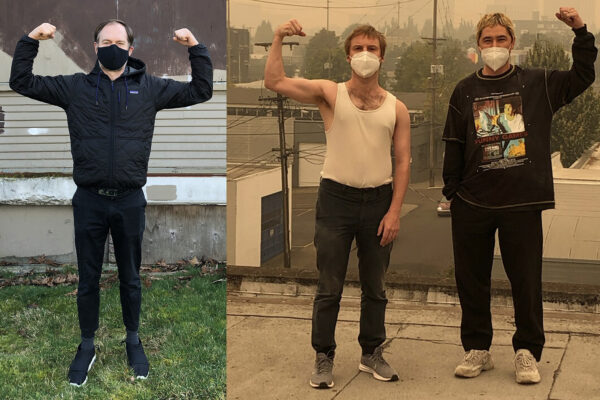 RM Francis is an artist living in Seattle who works with computer-generated sound. His most recent releases are A Taxonomy of Guffaws, on ETAT, and Nth White Dot, on Conditional.

Jack Callahan is a composer and sound engineer based in New York. Since 2013 he has been primarily working under the moniker die Reihe, taken from the journal edited by Herbert Eimert and Karlheinz Stockhausen. He runs Bánh Mì Verlag, an imprint dedicated to contemporary experimental music and culture. His music has been called “unbelievably bad,” “tiring,” “unsurprising” and “boring,” in one case all by the same person.

Jeff Witscher is a musician who currently manages his own custodial and maintenance company, Vincent’s Expert Cleaners in Portland, OR. He has recorded under many different names, Rene Hell perhaps being the most known. He focuses primarily on sound composition as well as video works for his live performances. Recent solo recordings include Approximately 1,000 Beers (2018), Fy Monkey Sisaj Kura (2017), Cob Music (2016), Bifurcating a Resounding No! (2014) and Vanilla Call Option (2013).

In Every Single Person Has Some Muscle RM Francis reinterprets Jack Callahan and Jeff Witscher’s 2019 composition What Happens on Earth Stays on Earth as an abstract drama of entropy set in the uncanny valley of artificial speech. The six human voices of What Happens on Earth Stays on Earth have been replaced by machinic proxies synthesized from the speech of the original performers. Vestiges of the organic appear briefly to comment on their own retreat from the realm of the audible before withdrawing to the edges of speech, out of which their inchoate vocalizations obtrude intermittently on the unfolding narrative. Whereas the original work was indebted to Robert Ashley’s spoken operas, Every Single Person Has Some Muscle redeploys the iterative strategy of Alvin Lucier’s I Am Sitting in a Room in the domain of machine listening, in which the transcription errors of commercial dictation software replace acoustic reverberation as the means by which the human voice is eroded, yielding a compositional logic based on phonetic drift and semantic refraction. Featuring the voices of Josh Haringa, Daren Ho, Madalyn Merkey, Colleen O’Connor, Nihal Ramchandani, and Asha Sheshadri. Mastered by Jack Callahan.